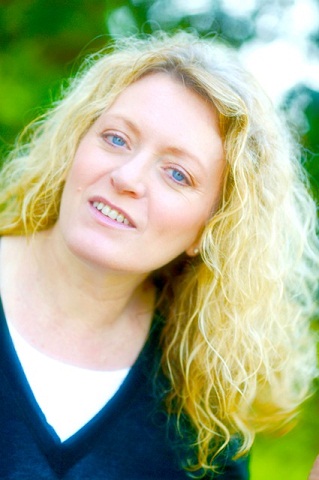 Being an artist, stylist, and designer, it’s surprising Cynthia LaMaide had time to sit down with me for an interview. I’ve always been a fan of her work so I was excited when she agreed to sit down for a quick interview in her Michigan home. I was swept away by her angelic personality and her creative studio.  Read my interview below and hear how passionate this divine woman is about her work.

DFN: Hello Cynthia how are you?

DFN: Your designs are so exquisite and unique. What inspires you to be so creative?

DFN: Well,  your dresses are so beautiful.  What is your favorite technique while creating them?

LaMaide: Thank you.  I like to do different techniques.  I like to add painting, marbling,  and weaving.  I just like all of the fiber art techniques. The basic foundation is I have a  body to dress and then I get inspired to make clothing to move and flow and dance with the body. That’s mainly my goal then I like to make the fabrics with all of the techniques I enjoy.

DFN: Detroit has earned a huge spike in the movie and fashion industry recently.  How do you feel about being a part of turning the Motor City into a Fashion City and do you think Metro-Detroiters are ready for the change?

LaMaide: Oh gosh, it has grown so much since we’ve moved here.  There are so many talented people and so much recent film work here and schools that even teach about fashion, so it’s nice that individuals can study here and work here.  I love being apart of it.

DFN:  You just recently got back from showcasing your dresses at the Smithsonian.  Congratulations!  How did it go?

LaMaide: Oh it was great.  The people there were so wonderful.  They give you a really nice beautiful space in the building museum which is a beautiful, beautiful building. The people that go there are there to collect your pieces. They collect fiber art and art to wear pieces and every time they see you they are eager to add to their collections. They called me and invited me to do their Craft to Wear show back in October, which they have every year. They only have 15 jewelers and 15 clothing people. It was a small show but a lot of people came from all over.  People even fly in for the show to see their favorite fiber artists.

DFN: That’s good.  So you also recently filled a wardrobe request for a major motion picture. Can you share when we will see Cynthia LaMaide designs on the big screen and which Hollywood starlit will be wearing them?

LaMaide:  Yes, the last one I did is called, “Wonderlust” with Jennifer Aniston and they used quite a few of my pieces.  The designer who did the movie saw my clothes at the Ann Arbor show and she wanted to use them for the movie so I sent her a lot of pieces.  I haven’t seen the film yet but she said I am going to be very proud. So that was nice of her.  There was also an opening on  “Tug” at the Newport Film Festival and I was a costume designer on that.  Another one that I have done that just ended is called, “What if…” and that was out just a couple of months ago.

DFN: Wow Cynthia! That’s great for you. What is your favorite part of being a stylist, a costume designer, and an artist?

LaMaide:  My favorite part is to make the clothes.  It’s always to make the clothes, but I have always done a lot of styling and I enjoy that too because when you make clothes your kind of isolated in a space but when your styling or working on a film, you’re with a team, it’s really nice to do both for me because I’m not so isolated.

DFN: What’s next for Cynthia LaMaide? Do you have any big projects or new designs coming soon?

LaMaide:  I am doing all new work now, so I’m getting all my new pieces.  My husband is my photographer and he is going to shoot them for a look book and will be doing a trade show and retail shows next year. I am also doing a gallery in Bloomfield in January.

DFN:  Thank you for your time today Cynthia and congratulations on your success.