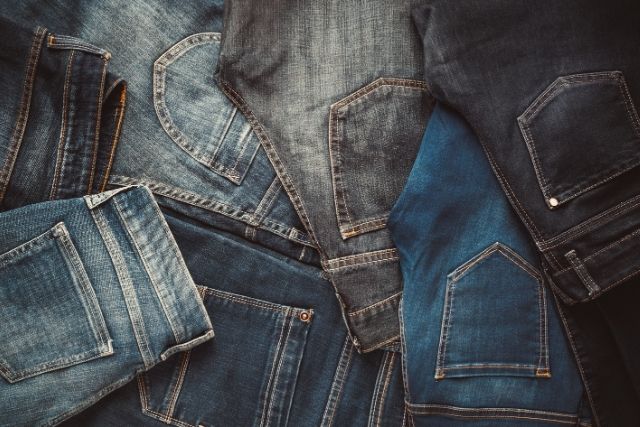 Blue jeans are as much a part of our culture here in the US as apple pie. Here, we highlight just a few stops on denim’s journey through pop culture.

May 20, 1873, is the day that Levi Strauss and Company celebrates as the official birth date of denim jeans. Back then, these sturdy pants were for work, not fashion. But as America stepped into the 20th century, denim became such a deeply embedded part of our culture that it was only a matter of time before it became part of our fashion too. Here, we salute our red, white, and blue jeans with a look at the top denim moments in pop culture history.

Most people remember Katherine Hepburn for her roles in movies like Guess Who’s Coming to Dinner and The African Queen. But beyond being a woman of impressive intellect and acting ability, she also had a strong sense of conviction. One of those convictions was that she and other women should be allowed to wear jeans, and she often wore them on and off set.

While working on a film once, the costume department stole her jeans because they considered them unfit for a woman to wear. In protest, Hepburn walked around set in her underwear until she got her jeans back. Her tenacity opened the door for other women, such as Marilyn Monroe, to wear jeans.

1951—Bing Crosby and the Canadian Tuxedo

These days, denim on denim is a fashion “no-go” with the unkind nickname “the Canadian tuxedo.” There’s actually a story behind this nickname that goes back to 1951 when actor and singer Bing Crosby went to check in to a well-heeled hotel in Vancouver. Not recognizing the star, the receptionist denied him entrance because he was underdressed, wearing denim on denim.

When Levi Strauss & Co heard about the story, they recognized a great marketing opportunity. They created a custom tuxedo made of their famous denim and presented it to Crosby. The name stuck, solidifying its place among the top denim moments in pop culture history.

Given the origins of blue jeans as an American-made invention for the working man, few clothing items are more synonymous with blue-collar America. And if it hadn’t already been that way, Bruce Springsteen made sure of it by making them the feature of his album cover for Born in the U.S.A. The cover drips Americana, with a flag in the background and a distressed red baseball cap tucked into the pocket of a pair of blue jeans.

The album cover sparked controversy at the time, with some wondering if he was trying to subvert the ideals of patriotism. But his pro-veteran lyrics made it clear that Springsteen was all-American.

As we look ahead for fresh new ways to style our jeans, it pays to take a moment to look back on the moments that made denim great. Whether you’re focusing on a classic Americana look or going all-out with a Canadian Tuxedo, one thing is certain—denim isn’t going anywhere anytime soon.

Disclosure – This post may contain affiliate links. By clicking and shopping, you help support Detroit Fashion and allow us to keep reporting on all things fashionable.